looped, stooped and full of juice 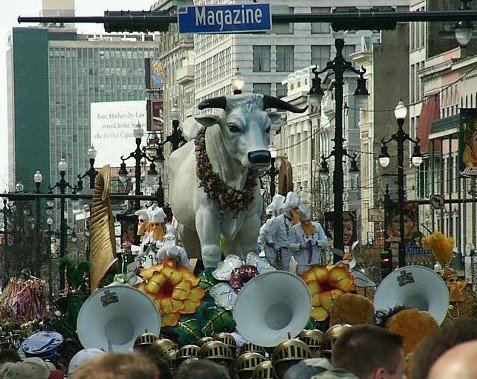 Man, I LOVE this blog!

why thank ya ms. l, thank ya very much. we love yers too!
what are ya doing for fat tuesday? whatever it is it has to be warmer and funner than what we have planned ... a bit of packing and gearing up for a move to sunnier climes. ahhh, but next year!

let me be the first to say it:

Sleepy, show me your boobs!

Great post M.A! I'm sorry as hell that I can't be down in N.O. for this Mardi Gras, the locals need it more than ever though, blow off all of that penned up steam from rotten 2005. I know the folks of New Orleans can find fun anywhere, even during this mess, that's why I love yall.

Happy Mardi Gras to everyone, wish I was there, I made a pot of Gumbo for yall:

Edwin Joseph Bocage, known to music lovers around the world as ‘Eddie Bo’,
was born in New Orleans, raised in Algiers and the 9th Ward. His family was
legendary in the traditional jazz community; cousins Henry, Charles, and Peter,
had all made important contributions playing with the finest jazz orchestras prior
to World War II. Peter played most of his career with Sidney Bechet. After graduating
from Booker T. Washington High School and spending time abroad in the Army he returned
to New Orleans to study composition and arranging at the Grundwald School of Music. It
was here that Eddie Bo developed a unique style of piano playing and arranging that
incorporated complex be-bop voicings, influenced by his mother, Art Tatum and Oscar
Peterson. His mother was a self-taught pianist whose playing style was like that of
Professor Longhair. Of course, Professor Longhair was a major influence on Bo as well.
Ultimately the combination of styles that became Eddie Bo’s trademark were a delightful
fusion of New Orleans rhythm and blues, jazz and funk.

In a career that spans well over forty-five years, Eddie Bo has made more 45’s than any
artist has in New Orleans other than Fats Domino. He has produced records for Irma Thomas, Robert Parker, Art Neville, Chris Kenner, Al “Carnival Time” Johnson and Johnny Adams. He is a prolific songwriter of such wonderful songs as “Check Mr. Popeye,” “It Must Be Love,” “I’m Wise” (made famous by Little Richard under the name “Slippin’ and Slidin’”) and the hit recorded by Etta James “My Dearest Darling.” Eddie penned Tommy Ridgley’s “In the Same Old Way” and further demonstrates genius in the realm of contemporary New Orleans funk on such creative works as “Hook and Sling” and “Pass the Hatchet.”

As a premier New Orleans' songwriter and performer, Tommy Ridgley's career began in 1949, when he was hired as a vocalist by Dave Bartholomew to record for Imperial Records. Tommy
Ridgley later went on to record for Atlantic, Decca, Herald and several independent labels.
His first recording, a 78 rpm record, "Shrewsbury Blues," (a tribute to his local neighborhood) was a big local hit.

A Rhythm & Blues legend, Tommy continued to work making music a pleasurable experience for his audience. His passion and dedication to his musical endeavors communicated his love for his profession.

thanks a.g.! i guess i got lazy and left out all that vital info ... you are the mentor i never admit to have, but then again, you is. i just hope it helps the uninitiateds get wit-it ... lucky bastard yer there ansd we're not, but not fer long!

The one thing I did have that you didn't was a chance to work a summer at One Stop Records at 350 S Rampart....Your Uncle, Joe Assunto hired me when I wqas 16, and I worked that summer cleaning and sorting 45's while Fess would come into play piano in the back room OR while Johnny Adams (The Tan Canary) or Earl King came in to listen to tapes....either of the previous weeks gig or of studio mixes. (Uncle Joe was their manager, and owned WATCH Records, it was your Uncle Joe who put Professor Longhair together with the Earl King written song, Big Cheif...did'ya know that?)

I couldn't get into them black clubs, but I did get a chance to hear Johnny Adams sing at the Dew Drop via the tapes he listened to in that back room....And your Uncle Joe, he told me point blank, one afternoon around closing, in front of Johnny Adams that he considered Adams the greatest singer in the world, before giving me an eight year old copy of "I Won't Cry"....I argued with him and said Art Neville was and said the greatest record was "All These Things" ...to which your uncle said, 'But I don't manage Art" and Adams replied by saying, he ought to record that song, because he loved it too, and started to sing All These Things...Uncle Joe said, "we don't have the publishing on that song....and you go back and take out the trash...."

Things To Do in California said...

I spent a whole weekend at that Mardi Gras back in the days!!

Help! My Mom Joel Ann Assunto, daughter of Joe Assunto died when I was a kid. I know we have lots of history. Me and my siblings spent out child hood at One Stop. Trying to put some history together for my kids. Any pics, info u have is welcome: fournierclan6@gmail.com
Kelly McGregor Fournier