the saints are coming 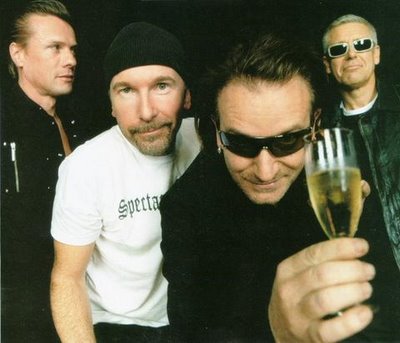 well, a bit of cool news found today. it looks as though U2 and greenday are joining forces for a new single, a tribute to new orleans with proceeds going to music rising, the organization that u2 guitarist the edge helped start to house and support the musicians that were affected by katrina.

the song is a cover of the 1978 punk single 'the saints are coming' by the skids, an obscure scottish band known more for the fact that their guitarist, the late stuart adamson, was the hands behind the band 'big country', who had that seminal 80's hit song 'in a big country'. 'the saints' is an obscure tune to be sure (it did make #48 on the brit singles charts), but one that seems to be a great fit, for the bands and the city. dunno when it's coming out and it's not leaked yet, at least i can't find it from my usual sources. but when i get it so do you... 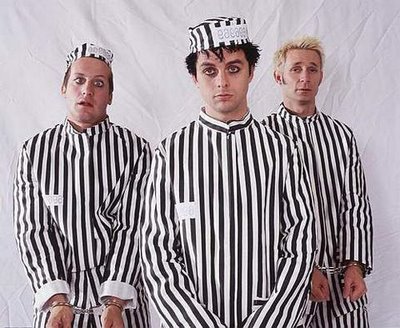 even better, both bands are playing on september 25th during the monday night football broadcast from the superdome in the heart of the big easy (dang, another three weeks and we'd be there too). what a great shot in the arm for the city. there is a game that night too. it doesn't even matter if the saints win, tho it would be cool to take down the falcons too... 'specially this early in the season. but that is all just a game.

the edge has been getting the musicians devastated by the hurricanes more help and attention than any other celeb, and he's getting some big names to help out. gibson guitars and president clinton have also got in on the act. gibson has built a limited edition les paul (painted like mardi gras in a flood) to donate and get proceeds for the affected musicians on the gulf coast. bill just handed them out... we should all be so lucky to do so much. 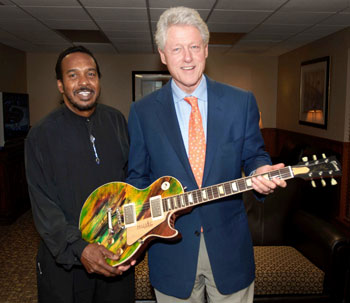 other than that, we are a week closer to home, halla-fuckin-yoo-yah!
Posted by sleepybomb at Thursday, September 14, 2006

U2 and Green Day together? I don't think my heart can take it.

Interesting news sure enough. I loved the energy of the Skids and recall seeing them at Leeds Uni circa 78. 'Into The Valley' and 'Working For The Yankee Dollar' were significant hits in these parts. Singer Richard Jobson became a bit of a pretentious arse if truth be known, but the late great Mr Adamson was the fulcrum.

Lets hope the new version makes some much needed brass for those who really need it.

Glad to see you posting (sort of) regularly again.

Thanks for the tip, should be good. Big Country were great, "The Crossing" was the first CD I ever bought circa 87. I still have it.

I see you'fe listening to Thom Yorke's "The Eraser"..... great album, I'm still tossing up whether to get a copy of the original print of the album cover from Stanley Donwoods site.

The Skids were hardly obscure in Britain, seeing as how they were one of the best known punk bands of the late seventies, with a charasmatic front man named Richard Jobson - who was also a sometime model and actor, and also did a poetry tour. These kind of stunts garnered them a lot of press attention. Meanwhile, their single "Into the Valley" - from the same "Scared to Dance" album that "The Saints Are Coming" is from - cracked the British top ten, as did the single "Working for the Yankee Dollar" from the following album. Their next album "The Absolute Game" also made the top ten in the UK album chart.

That's pretty much what I said Anonymous!
Nice to see you are watching 'Fawlty Towers' Sleepy old boy. Basil is a fuckin hero!

mr dvd you always fill in the gaps i either leave out or am just to stupid to know, and i just love it when you say 'fulcrum'...

hey johnno, long time no visit, i mean me, how the hell ya been? i've been to damn busy to check out down under lately, but here i come...

anon, i think that shit has been covered...

mr dvd, 'fawlty towers' is the best damn tv show, period! it runs every saturday morning here, well either that or the marx brothers, it's always a close call (sunday mornings are for looney tunes, for the kid ya know, *wink wink*...

BC fans are supporting Music Rising in a big way, even those of us who ain't that crazy about U2 or Green Day. What they're doing is a good thing, and it's great to see Stuart getting a little recognition.

There's been a lot of music made since The Crossing, and it just keeps getting better. Check it out, you might hear something you like.

BIG COUNTRY is a great band.its great to hear that u2 is doing a cover of one of the stuart adamsons songs.
stuart would have loved all the hype and also fund raing for ythe cause.
he also recorded a great cd just before he died with the american artist marcus hummon.the band was called the raphaels.
you can hear this stuff at www.trackrecords.co.uk and big c stuff at www.bigcountry.co.uk
he was more than a one hit wonder
rip