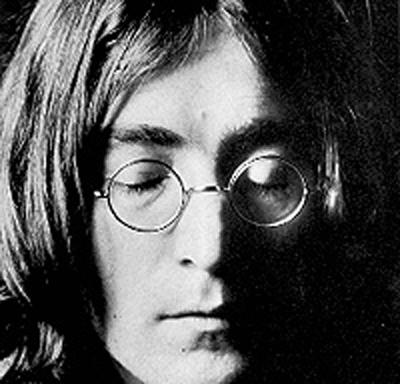 i guess anyone who is old enuff to remember could tell ya where they were and what they were doin' when they heard the god-awful news that night in december of 1980. me, i was making a tape of beatle sound-alike stuff for my lil sis angel as a x-mas present, songs from cheap trick, badfinger, sparks, big star and the like, (i corrupted that poor girl so bad, to this day she still can't listen to revolution 9 because of me playing it backwards when she was just a pup, but now she is grateful for the rest of the influences).

... it was a monday night and i was feeling rather good, picking thru records looking for the ideal beatlesque tunes to fill a 90 minute casette. and as usual, (on a monday nite), the t.v. was on monday nite football, sans sound. the ear-goggles were on when my mom came busting in the wreckroom, scaring the crap outta me and pulling the phones off my head yelling, 'john has been shot!'. i laffed her off, she left, just to return about 5 minutes later, yanking the phones off again saying, 'john is dead ...'. i turned to the t.v. and saw a solemn looking howard cosell talking to the camera. when i flipped up the sound i heard howard say something about '... he came to visit us in the booth for the giants game in october ...', then i knew it was true. i sat cross-legged on the floor, staring at the tube, more numb than i had ever felt since my father died, with mom going on about something that i didn't really hear ... i just knew.

i didn't cry until the next night when all my friends got together at our bar, sir john's in fat city. that is when it really sunk in, we were listening beatle songs, drinking and singing along ... and we all cried together. we had lost a brother and a friend. we had all grown up with john. he spoke for us all, from a lofty perch maybe, but he was still us, human, frail and scared. in the following days, watching the mass of people in the streets on t.v., weeping and singing his songs all over the world, i kept crying ... those were some long and sad days. it hasn't really gotten any better, the days are still too long and sad without him ... and i'm still cryin' about it.

so we spent last night playing all of john's songs, drinking wine, singing along and loving the way he made us feel.

buy john lennon 'cos ya should!

Thanks for sharing. I was sitting in bed reading that night when my mom came in and told me the news. Partly in shock and partly in disbelief, I totally ignored her and told myself that it wasn't true. The next morning, there it was in the newspaper.

And thanks for not mentioning the cretin who murdered John. You know, he did it to steal John's fame, so we must never repeat the killer's name, and ever remind people of John instead.

"Johnny never meant to say goodbye" was always one of my favorite Force of Habit songs. If anybody has that recorded, I would love to hear it again.

"John who?", I asked. I was only 13 at the time. I knew of The Beatles but didn't know much about the individuals at that stage. It's taken me another twenty plus years to find out that one!

BTW Mum and Dad had front row seats at the Beatles gig in Adelaide. Queued for a couple of nights to get the tickets.

thanks ya'll, i was hoping to get more stories about this, i know there are quite a few people who remember, but i guess not.
and tim, i had no intention of giving any nod to that cretin.
and john, even at 13 it seems to have made an impression on you, and that story about your parents is great, (so is the link)! i have a ton of books about the beatles and the aussie tour apparently had the biggest crowds of any they did. the footage of them on the balcony in front of about a million fans is still unreal ... we'll never see that again anywhere!
thanks guys.

Sleepy,
With all of my attention...-:) Great stuff and glad to hear the stories.
Peace
Susana

Funny ... with all me own personal madness going on in my life right now, when I rarely remember what day it is, I woke up that morning and said, this is John;s Birthday. And I remember exactly where I was , on that fateful day. Listening to Mom tell Michael that John Lennon was shot and I was desparatly tring to put out a forbidden cigarette and hide all evidence so when my mom told me, she "would'nt know". She never came to my room, only to Michael's. I laid in bed, crying, listening to WRNO, The Rock Of New Orleans, Playing Beatle song after beatle song all night.