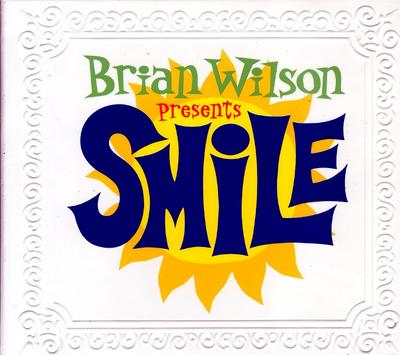 '... what the fuck is that supposed to mean', a confused mike love alledgedly quizzed a bedazzled van dyke parks about the words to 'surf's up'. van dyke is said to have just grinned and answered, 'i dunno' ... or was it about the lyric 'over and over the crow cries uncover the cornfields ...', no matter now, he was pissed. pissed enuff to put up a fight and help stop the 'smile' project altogether ... and we believe he is still pissed, at least his current disfavor with the original project is still very apparent ... and he can't really be too happy at all that brian trashed his lyrics to 'good vibrations' in favor of tony asher's, or that 'smile' has become such a successful reality almost 4 decades after the fact. after all he did to stop it and keep the formula rockin' along ... 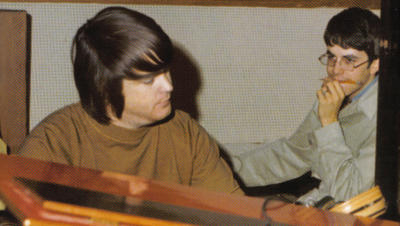 'surf's up'
A diamond necklace played the pawn.
Hand in hand some drummed along
To a handsome mannered baton.

A blind class aristocracy.
Back through the op'ra glass you see
The pit and the pendulum drawn.

Canvass the town and brush the backdrop.
Are you sleeping?

Hung velvet over taking me.
Dim chandelier awaken me.
To a song dissolved in the dawn.

The music hall-a costly bow.
The music all is lost for now.
To a muted trumperter swan.

Canvass the town and brush the backdrop.
Are you sleeping, brother john?

Carriage across the fog
Two-step to lamp lights cellar tune.

The glass was raised, the fired-roast.
The fullness of the wine, the dim last toasting.
While at port, adieu or die.

A choke of grief hard hardened eye,
Beyond belief, a broken man too tough to cry.

Surf's up!
Aboard a tidal wave.
Come about hard and join
The young and often spring you gave.
I heard the word.
Wonderful thing!
A children's song.

A child is the father of the man.

'canvas the town and brush the backdrop' ... really tho, what the hell does that mean? it is pure pop poetry, and the nod to 'paperback writer' (are you sleeping brother john?) ...
'the laughs come hard in auld lang syne', i guess they do. and the title is in complete counterpoint to the old idea of a surf song, no wonder mike love was scared and pissed, it is light years from the beach and the idea of the beach boys ...
brian tried to explain the meaning of the song a long time ago in an interview, then it made less sense.
'surf's up' is arguably one of the best pop songs ever written. and it absolutely makes no sense. its beauty is in the flowing of the sound of the words to the feel of the music. from the 1st hearing all those years ago thru today it remains fresh and relevent, sure to give the shivers it is so gorgeous.
and this song swept us away a few weeks ago in berkeley, while watching brian and his brilliant band pull off 'SMiLE'.
... and 'surf's up' never sounded better.

we split for berkeley thursday, sept. 1st to catch brian wilson the following night at
the greek theater on the university of california campus. we've had our tickets since spring, have been looking forward to this show for decades and really needed to get away from all the horror of that week. we'd never been there before and it was a really nice town, a very laidback, liberal college community, our kinda place . friday we stumbled all around the hip area near the school and saw more coffee and head shops in a 3 block area than anywhere else on earth. we sashshayed onto the campus just in time for a pep rally, (which we got a big kick out of). 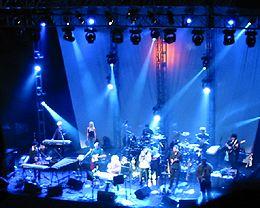 the 'hotel funky' was walking distance from the show. we got there early, bought wine and all the junk w/ 'smile' we could carry, (poster, hat, shirt, and program), and found our seats. it really was a greek theater, not just a fancy name. we had seats right in the middle of this great open air theater. it was a wonderful late summer night, clear skies, slight breeze from the bay and the feeling of magic in the air. the sound was excellent, the band was tight and they played just about every favorite beach boys song we know, (except 'sail on, sailor', daggnnabbitt!). and in between the hits was 'smile'. all those years of collecting the fragments of 'smile', fantasizing about what order the songs would run, never thinking to actually hear it played live, in its entirety, was completely breathtaking. and we thought it amazing how many people knew the words to even the most obscure sections of 'smile'.
the end of the show was great too. brian blazed thru a set of the rockin' surf songs that had the place on its feet and screaming along. as he walked off stage to rousing cheers we could see him smiling like a kid on christmas day, and as we left, so were we.
it was a really magical night, and it doesn't matter what the fuck 'surf's up' means ... it's the feeling that counts ...
great fun had we. 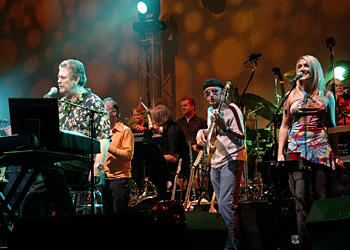 some mp3s from 'smile' (via yousendit):

brian wilson - side 4 from the vinyl 'smile' (instrumentals of 'heroes and villians', 'cabinessence', 'wonderful' and 'wind chimes')

and some radio stuff from the series 'creators on carnagie' on national public radio:
'smile' on npr part one (warm-up set and background), part two (brian performs 'smile')

Posted by sleepybomb at Friday, September 23, 2005

I've always been sort of fascinated by the conflict between Brian and Mike. It sort of symbolizes that point in the Sixties when some artists realized there had to be change and some artists thought they could just hang on to the status quo and keep having fun, fun, fun.

Have you ever heard the album "Pacific Ocean Blue" by Dennis Wilson? It's really nice stuff, kind of reminds me of "Holland" in places. It's never come out on CD as far as I know...

and mr love still seems very mad about the whole affair, altho he did get screwed by murray wilson on song credits, and sued brian to get his money, he has a bad taste in his mouth about anything related to 'smile' ...of course, the formula had run the course by then anyways, it was killed by brian on 'pet sounds'.
and i am sure i can cop a cd of 'pacific ocean blue'from a.g., i haven't heard it in a while, but dennis was a very songwriter talented too, kinda like being george harrison in the beatles having brian as a brother ...
and i love the beach boy period from 'pet sounds' thru 'holland', (great memories of the 'holland' lp i might add.)

Bless you, M.A. - that was the most incredible tribute to the Brian I have ever read.

thanks, but it gives no idea of how really good the show was. just when we needed something to 'smile' about brian worked his magic on us.

I wouldn't put the Love/Wilson thing into heroic or tragic or symbolic terms (although Brian is a hero), it's just brotherly squabbling, although Brian was always more open to emotions and artistry. I think the lyrics in question are abstractly beautiful. Saw Wilson live quite a few years back, now...was it '96? Anyway, I wonder if that Ann Arbor gig was his first solo concert ever. Except for me and a friend, the audience was all celebs that night.