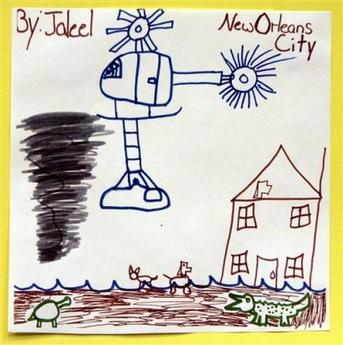 Posted by sleepybomb at Monday, September 12, 2005

fantastic blog...just found you via web nymph. i take it your from Metairie, LA? later. justin

Love your blog. And I love the "art". Damn Gators in the yard

M.A., you're downright inspirational. Love the music and your righteousness. Thanks for the link at the wreckroom and it is now reciprocated at Muttering Jam. Peace, brother! I feel revolution in the air!

By Sunday or Monday (I have a bussy week-end approaching) I will be posting my ten all time favorite albums ever on my blog, hopefully with links to a few song from each album. I am contacting other blog friends to see if they can do the same.

PS. Mr. Harvey is up to something new. Have no confirmation... I just fel it in my bones.

PPS. Looks like the all new CPG album will rear its ugly head come the begining of November. Keep you posted.

PPPS. We settled on "Relapse" for the name of the new album.

Someone had e-mailed me that letter. I'm glad to know where it was originally from. It's great! Thanks.

Hello old boy - it's a while since you posted - hope you are bearing up mate.
I've just read that NASA are planning to land on the moon again before 2020. Fuckin' marvellous! I thought there might be enough on the agenda closer to home?

MA, I too look forward to your next post... I see you added an image of Rita that's fairly current so I'm hopeful we'll get a new post soon too...

and in the "great minds think alike" vein, before I learned how they come up with the names for tropical storms I was thinking about a beatles-inspired naming system (thanks in no small part to the fact that every time they mention Rita I start bopping to "Lovely Rita" in my head): "Michelle (ma bell)", "(Lovely)Rita", and "(Sexy)Sadie" and so forth. Then, of course, on the male side: "(Hey) Jude", "Maxwell('s silver hammer)" and so forth.

well, this is what i get for ignoring the blog for a week ...so many comments!
let's get to it then, eh?

satisfied, thanks for stopping by, i like your blog also and will come back often ...

al, thanks again and i can't take credit for the art, but that must be one traumatized kid after that ...

griffina, thanks for the link, my stock just shot up! i feel the revolution too, but we know it will not be televised, due to the conflict, but the feeling is there ...

sonic, i am still waiting for the list, i have been debating with my inner child on whether to do another list post, i dunno if i could whittle a top ten lp list ...it'll prolly be a top 100 when i get thru ...i hope what you said about billy is true! i'm sure you'll keep me up to date. oh yeah, 'relapse' is a cool name for the record, i just did that today!

ms. laurie, i found this on nola.com and just had to post it, that chris rose just slays us, and he is brutally honestly funny!

mr van dyke, we are doing fine, just trying to get the facts on what is going on in the easy, then get down there to fix it, before first snow. and just what is the deal with nasa asking for megabucks while this shit is going down, their head is on the moon, the dark side apparently.

nostra, too true, great minds do think alike, so what is our excuse? and ya know the worst case senario hurricane models name was (polythene) pam?
yeah buddy!
whew, i need to pay more attention to this beast !!!

good blog!
that's a good idea.
I have a website
cell phone & service plans but it is poor!

it was a very great idea, unlike the spammer squiggly line thingy which is apparently useless ....